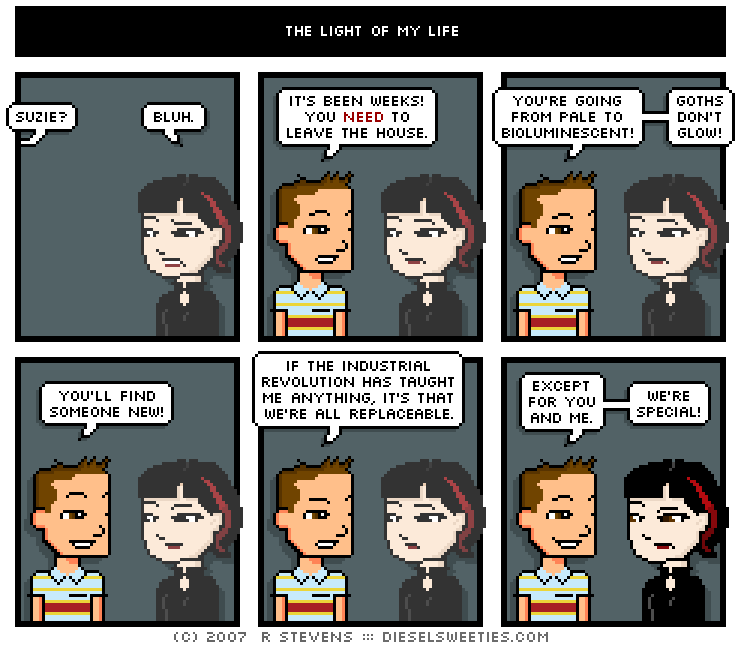 Isn’t it weird how we all hit on things together? Today’s Diesel sweeties shines directly on some things I’ve been thinking about regarding Cuaron’s Children of Men as well, of course, as the Wire.

First, let’s take what Simon says is the primary thesis of the Wire: Humanity is increasingly expendable.

Why is this? Globalism, essentially. In a global economy that revolves solely around profit, humanity is reduced to nothing more than capital. No surprise. Industrialism, capitalism, its all pretty old at this point. So we look at Children of Men. The conceit of that movie is that people can no longer reproduce, and all hope is lost, but the real central idea is again that people have less value as time goes on. Why do Americans hate immigrants so much? Xenophobia? The very likely fear that their jobs will go away? Note- I’m not saying that these people are “stealing” jobs, I’m saying that they are willing to work for less than many people, and job creators know this. The problem is this: globalism demands illegal immigration. It demands sub-standard wages and it demands the destruction of unionized labor. Why? Because unionizing forces corporations to change their focus from profit to worker value, and that is not why corporations are in business. With a fully functioning global economy that little values human rights, let alone those of the worker, cheap labor is a demand placed on every country. We are seeing the beginning of this and it will only get worse. Americans will eventually have these choices: White collar labor (though as time goes on these will be harder to get), low paying service industry labor or sub-minimum wage day labor with no benefits.

Of course, Indie Rock Pete is right for now- he’s part of the “Creative Class“, after all. He will survive in the upper class as the poor get poorer and the middle class disappears.

One of the amazing things about Children of Men is that it depicts a world so real, yet so alien to most of us. The problem is that as Americans we can’t see that a lot of the world already suffers in exactly the way the England of 2027 does. I guess that’s kind of the point of the film- this will consume us all eventually. Movie reviewers have likened scenes from the film to Nazi Germany, but what they are missing is that these scenes exist in the shanty towns of Mexico, the refugee camps of the Sudan, the prisons we pretend the US isn’t operating and yes, the security state that is Great Britain.

Some have complained that the movie is very hard to watch at points, that it is too real. And that is absolutely true. The sad fact is that it is something that we have chosen to avoid seeing in our own lives. In the life of the world. We are the last bastion of “civilized culture”- willfully ignorant of the world around us, living in a fenced in fantasy and trying hard to forget that we share a world with 5,700,000 other people.

One thought on “The Decline and Fall of Human Worth”